Dimethylsulfoniopropionate (DMSP) is an important marine osmolyte. Aphotic environments are only recently considered as potential contributors to global DMSP production. The Mariana Trench study conducted by the research team reveals a typical seawater DMSP/dimethylsulfide (DMS) profile, with highest concentrations in the euphotic zone and decreased but consistent levels below. The genetic potential for bacterial DMSP synthesis via the dsyB gene and its transcription is higher in the deep ocean, and is highest in the sediment. DMSP catabolic potential is present throughout the trench waters, but is less prominent below 8000 m, perhaps indicating a preference to store DMSP in the deep water for stress protection. Deep ocean bacterial isolates show enhanced DMSP production under increased hydrostatic pressure. Furthermore, bacterial dsyB mutants are less tolerant of deep ocean pressures than wild-type strains. Thus, the research team propose a physiological function for DMSP in hydrostatic pressure protection, and that bacteria are key DMSP producers in deep seawater and sediment.

This study has discovered and confirmed the new function of DMSP in pressure protection for the first time, pointing out that heterotrophic bacteria are important DMSP producers in deep seawater and sediment. It thus reveals a new process mechanism for bacteria to participate in the deep sea sulfur cycle. The research results provide a basis for re-estimating the global DMSP production, fluxes and climate effects, exerting significance for further understanding the role of deep-sea bacteria in the sulfur cycle. 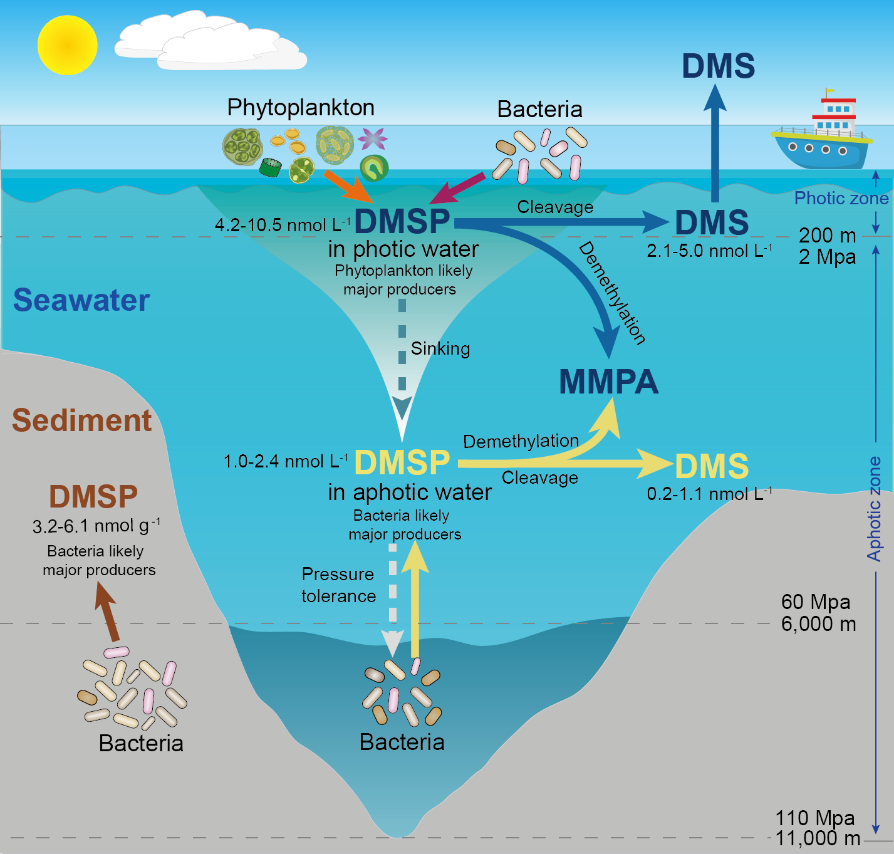 The proposed cycling of DMSP throughout the water column

Prof. ZHANG Xiaohua is the corresponding author of this article and Prof. Jonathan D. Todd from University of East Anglia in UK is the co-corresponding author. ZHENG Yanfen and WANG Jinyan, two doctoral students of Prof. ZHANG are co-first authors. This work has received strong support from the College of Chemistry and Chemical Engineering of Ocean University of China and the Institute of Oceanology, Chinese Academy of Sciences. The research progress demonstrates the importance of interdisciplinary and international cooperation.

The original link of this article is :