Recently, Dr. Duan Yongliang and Dr. Liu Lin, young scholars both from QNLM Functional Lab of Regional Ocean Dynamics and Numerical Modeling, published in Scientific Reports, a journal from the publishers of Nature, their latest research result —— Anomalous behaviors of Wyrtki Jets in the equatorial Indian Ocean during 2013 (Link: http://www.nature.com/articles/srep29688).

Wyrtki Jet is a current of narrow range at high velocity from west to east along the equator of the Indian Ocean, occurring twice a year during Asian Monsoon Periods (April-May, October-November), affecting the water body, heat quantity, and salinity exchange between the Eastern and Western tropical Indian Ocean. Limited by the in-situ observation, the research remains scarce on directly observing the annual anomalous behaviors of Wyrtki Jets and their regulating mechanism.

This research reveals the zonal current evolution observed by the ADCP mooring system in the spring and fall of 2013 (Fig.1). It was found that both strong WJs occurred in the upper 130 m layer and lasted only month, showing characteristics of stronger strength, deeper range and shorter time compared to mean state of climate. It is noteworthy that the exceptional spring jet was unexpectedly stronger than the fall jet in the same year, which is clearly against the previous understanding, and the fall jet peaked in December, one month later than expected. According to the analysis, the anomalous behaviors of Wyrtki Jets was supposed to be caused by intra-seasonal oscillations, which was further proved by the numerical experiment (Fig.2). This research result serves as a model of the trans-time and trans-scale air-ocean interaction, providing a key reference for understanding and improving the global climate model. 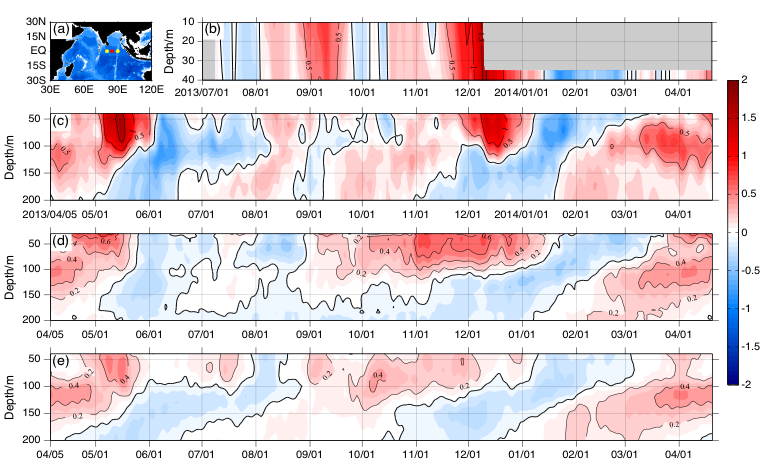 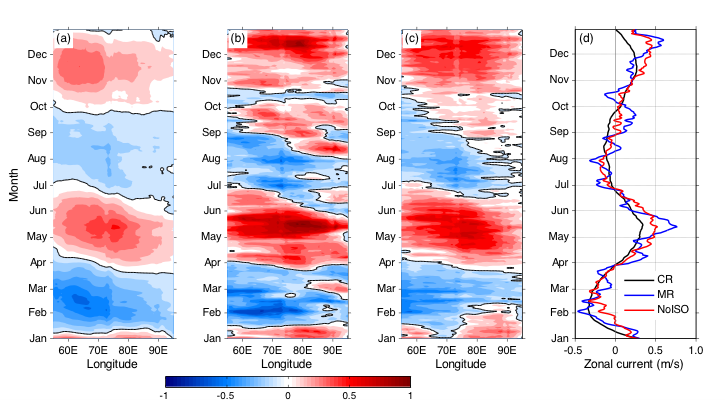 Fig. 2  Time-longitude diagram of simulated surface zonal current for CR (a), MR (b) and NoISO (c), all averaged ones between 2°N–2°S. The CR and MR simulations are forced by daily forcing fields from climatology and year 2013, respectively. The forcing fields in NoISO simulation are same as those in the MR except for subtracting the ISO signals. Time evolution of the longitudinal averaged zonal current (d).