May 22, 2017 witnessed the launching ceremony in Australia for the International Center for Southern Hemisphere Oceans Research (CSHOR), co-established by Qingdao National Laboratory for Marine Science and Technology (QNLM) and the Australian Commonwealth Scientific and Industrial Research Organization (CSIRO). The center was jointly unveiled byDr. Wu Lixin, Director of QNLM, and Dr. Larry Marshall, CEO of CSIRO in Hobart, Tasmania.Arthur Sinodinos, Australian Minister for Industry, Innovation and Science, sent congratulatory message by video. Lu Ping, Counselor for Science and Technology of Consulate General of PRC in Sydney, delivered a speech. Congratulatory message was also given by the representative of the Governing Council of QNLM, Ji Peiwen, Assistant to the President of QNLM. Participants also included Pan Kehou, Secretary-General of QNLM Academic Committee, and the delegates from University of New South Wales and University of Tasmania. The ceremony is a substantial progress of QNLM’s internationalization strategy of constructing the global collaborative innovation network. 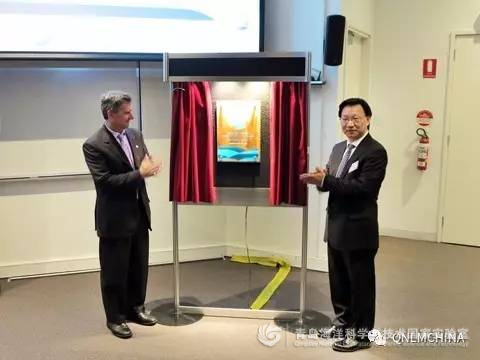 Wu Lixin (on the right) and Larry Marshall (on the left) 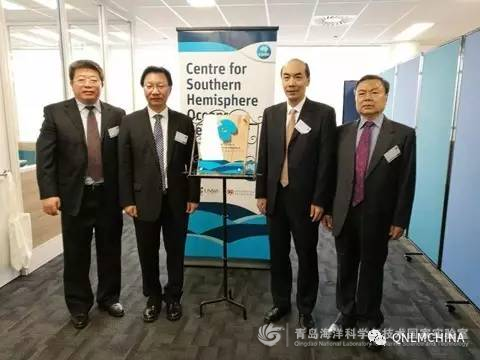 Under joint construction for international forefront

Covering 71% of the earth area as an integral part of the global climate system, ocean supplies most heat to the atmosphere and takes in 40% CO₂ of the atmosphere, one of the greenhouse gases considered to give rise of the climate change. Scientists have been working hard to find out how ocean affects the climate change. The Southern Hemisphere Ocean is the only one that surrounds the whole earth and connects the oceans. As one of the two poles of the global thermohaline circulation, it has a significant impact on the global oceans and climate change by driving and regulating the thermal, carbon and biogeochemical circulations of the earth. Given that the marine data currently available is mostly from the Northern Hemisphere, where most marine research institutions are concentrated, the international community has been making great effort in recent years to strengthen the research capacity for the Southern Hemisphere Oceans.

Responsive and responsible, QNLM initiated the cooperation with CSIRO by jointly setting up CSHOR in Hobart, capital of Tasmania in Australia. The Center promised that 10 million AUDwill be invested in five years of 2017-2021 for the observation and research of the Southern Hemisphere Oceans (Southern Ocean and Antarctic), as well as for education, training and management of information and data. The Center is under the international operation, with the key issues decided by its 5-member Steering Committee, 2 from QNLM and 2 from CSIRO, under the chairmanship of Dr. Susan Avery, Honorary Director of Woods Hole Oceanographic Institution in the United States. The Director of the Center is globally recruited, responsible for its routine operation.

More consensus and cooperation to better cope with climate change

With the whole world subjected to the climate change, no single country could fulfill the mission of finding out how the global climate changes. It is inevitable for all the countries involved to be united in the face of the challenge, and contribute to the international exchange and cooperation of the related marine research institutions, as seen from QNLM’s effort in hosting CLIVAR 2016 Open Science Conference, known as the Climate Olympics. Over 600 marine and atmospheric scientists from more than 250 research institutions in 50 countries and regions participated in it, including USA, UK, France and Germany, as well as representatives from the related international organizations like World Meteorological Organization and UNESCO/IOC.

QNLM Director Wu Lixin shared what President Xi Jinping said in the recent Belt and Road Forum for International Cooperation in Beijing, “No country can remain not affected, nor able to solve the world problems by itself in this interdependent times of global challenges”. Director Wu said that for the purpose of common progress and development of science, there was no choice but to work hand in hand for innovative synergy to tackle the major issues especially the climate research that concerns the human being.

CSIRO CEO Larry Marshall also said, “This is an important turning point in our approach to climate science, recognising that this is a global challenge that requires a global approach. That we need to deepen our networks and strengthen our armoury to not only prepare for what lies ahead, but respond today to what is already a stark reality all around us.” 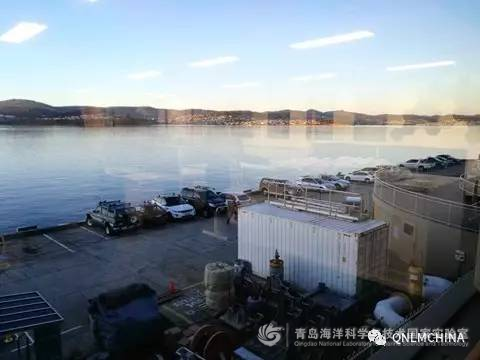 Outside views from CSHOR offices

Civilization progresses in opening and science advances in exchange. It is in the perspective of solving the problems challenging the human being that QNLM deploys the global innovation network with the world，leading the research institutions for a new mode of the global governance.

Larry Marshall said, “CSIRO has been performing world-class climate science here in Tasmania for decades - but we can’t do this alone. This comprehensive and collaborative new initiative gives critical new support to CSIRO, and offers real value and differentiation to the global effort to take action against climate change. He showed that, “We are delighted to bring the full resources of Australia’s national science agency, as well as the critical role we play in global climate measurement, to this new collaboration.” The Southern Hemisphere ocean has a crucial influence on the global climate, CSHOR will effectively tackle global climate change by scientific research, which will be not only beneficial to the two countries, but also to the whole world.

Ji Peiwen, Assistant to the President of QNLM Council, said to the media that “Under the internationalization strategy, QNLM is on the way to be a world-class marine research institution by building the global network for collaborative innovation, of which CSHOR is a key component. CSIRO is a leading research and development organization for marine sciences in Australia, providing new approaches for Australian Government for the benefit of Australian society and economy. CSHOR will complement each other and promote resource sharing and innovative capacity for a win-win outcome.” Ji also showed that “QNLM plans to set up more joint research centers in the future.”

Every corner of the world taken into account for innovative cooperation

In a number of fields such as environmental sciences, China and Australia agreed and issued the Statement on Jointly Building Research Centers before 2017, the 45th anniversary of the founding of China-Australia diplomatic relations. Marine science and engineering was even more prioritized as one of the four key areas covered by Sino-Australian science and research fund in 2016. As Chinese President Xi Jinping pointed out in the Belt and Road Forum, China is willing to start innovative cooperation with all the countries by launching the action plan of Belt and Road science and technology innovation for humanity exchange, joint laboratories, hi-tech park and technology transfer.

For cooperation and upgrading of the world marine research, the joint center is set up in Australia, a long-term partner of China. It further materialized the previous Sino-Australian agreement on joint center and well responded to the Belt and Road Initiative.

According to President Xi Jinping, it is up to all the participants to plan the Belt and Road construction and share its results. Based in Qingdao and with a global vision, QNLM upholds the principles of Openness, Mobility, Cooperation and Sharing in its internationalization strategy to boost the marine science and technology and share its research results，backed by the big science platform and in accordance with the national strategic tasks.

Counselor Lu Ping said that QNLM is the first national laboratory in pilot operation in China and also the only one for marine sciences at the national level. Similarly, CSIRO is the largest and the most important research organization in Australia. As an alliance between giants and considered a model of Sino-Australian innovative cooperation, CSHOR will remarkably contribute to the researches on ocean, climate and environment of the Southern Ocean areas.

Larry Marshall said to the media, that the launching of CSHOR is very significant as it is the first one of its kind on the Southern Ocean, on which the current research is far from enough in the whole world. It can be referred to when the similar centers are under planning in the world. 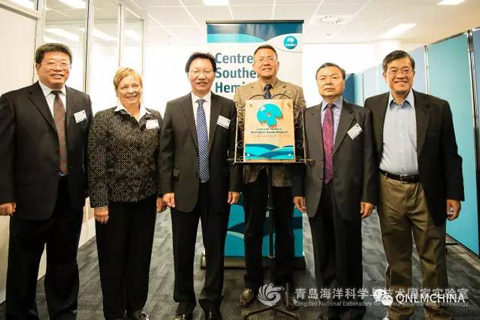 CSHOR has been put into operation as the first overseas joint research center of QNLM ---the first step of QNLM to develop the collaborative research and set up the global marine innovation network. By setting up more research centers in countries like the United States, Germany and Russia, QNLM will become a world-class research center for marine science and technology and an open platform for global collaborative innovation. Continuous and sincere effort will be made to achieve that goal.