On July 28, 2016, the latest research result was published in Nature, titled Western boundary currents regulated by interaction between ocean eddies and the atmosphere. It was accomplished by QNLM team in Functional Lab of Ocean Dynamics Process and Climate as the first author of the paper. Nature invited the international authorities in the related fields to make comments in the same issue titled Climate science: Unexpected fix for ocean models.
The classical theory on ocean circulation holds that the western boundary currents are driven by the large scale windfield. Depending on the high resolution area and global climate coupling model in Kuroshio Current area of the North Pacific, the paper points out for the first time that the interaction between ocean eddies and the atmosphere is very important in maintaining the western boundary currents. The paper also expounds the dynamic mechanism of how mesoscale eddies affect the western boundary currents. The studies show that the velocity of Kuroshio Current in the Current area and its extension areas will be reduced by 20%-40% if the mesoscale eddies and atmosphere interact less with each other. The analysis of the potential energy of the mesoscale ocean eddies shows that 70% potential energy of the eddies here will be consumed by mesoscale thermo-mechanical coupling in the air-ocean interface. The consumption of the potential energy will attenuate dramatically if the coupling of mesoscale eddies and atmosphere is lessened. Naturally, the potential energy will decline itself to maintain its input-out balance in mesoscale eddies. As a result, the mesoscale eddies takes in less energy from the mean flow, ending up in the less strong mean flow－Kuroshio Current (Fig.1). 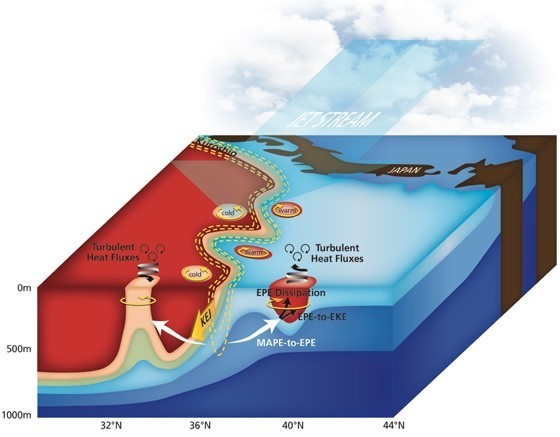 Fig.1 Interaction between mesoscale ocean eddies and atmosphere in Kuroshio Current area of North Pacific and its extension area

Fig.1 Interaction between mesoscale ocean eddies and atmosphere in Kuroshio Current area of North Pacific and its extension areaThis research result opens the new route to the dynamic mechanism of the western boundary currents and provides theoretical basis for accurately simulating the western boundary currents in the climate models. The result is very significant for further simulating and predicting the mid-latitude storm axis and how it responds to climate change. It is another key development achieved by QNLM Functional Lab of Ocean Dynamics Process and Climate in its research on the Pacific western boundary currents. The past three years have seen a series of high-level research results of the Lab published in Science, Nature, Nature Climate Change, and Nature Communication about interactions of multi-scale dynamic processes in “Two Oceans and One Sea” (Western Pacific, Indian Ocean, South China Sea). They made the Lab globally significant and influential, demonstrating its original creativity in these research areas and providing scientific cognitive basis for the major strategic task of “Transparent Ocean.”